JEZZA (V.O.): You've seen our cars, and will have noted the excellent modifications I've made and the pointless tinkering from those two simpletons. But of course, our convoy has a fourth wheelman. Some say he caused the apocalypse with tremendous amounts of understeer, and that if he was bitten by a zombie, the zombie would turn into him. All we know is, he's call the Stig.

CUT TO: THE STIG looks directly into camera, arms folded. He does not move.

JEZZA walks into shot next to THE STIG.

JEZZA (TO CAMERA): After we retrieved Stiggy here from the wreckage of the BBC, he told us that he also wanted to modify a vehicle to take out into the wastes and seek his fortune.

CUT TO: JAMES is walking, the camera pans with him.

JAMES (TO CAMERA): That's right. Initially, one of the producers told him to take one of the many abandoned vehicles that are readily to hand these days, and work with that.

CUT TO: HAMSTER, walking in the opposite direction, the camera panning with him.

HAMSTER (TO CAMERA): After the ensuing... debate, the surviving producers thought a bit more, and found this Lamborghini Gallardo.

CUT TO: The ARMOURED LAMBORGHINI. JEZZA is already examining it. JAMES and HAMSTER walk into shot. 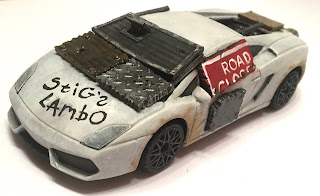 JAMES: Did he really attack a producer?

HAMSTER: Very much so.

JEZZA: So, this is, somehow, a Lamborghini Gallardo. As you can see, the Stig has added some extra plating around the windows and doors, including something fairly hefty to cover the windscreen. 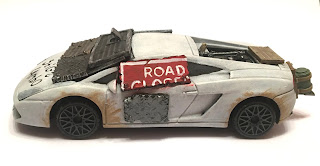 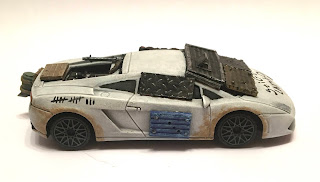 HAMSTER: He's only left a little window to see out of, look. He did tell us that he only needs to see things that won't get out of the way, though. 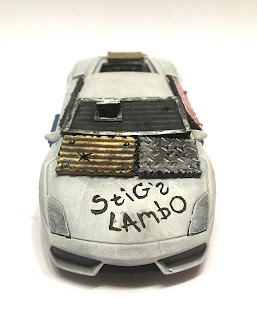 JAMES: He's added this oil dropper thing to the back, which can cause havoc for anything else on the road. But more worrying than that is the machine gun mounted to fire out of the back window. 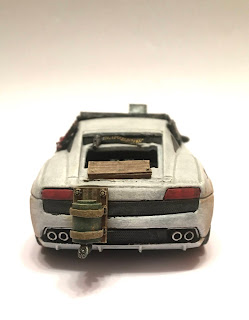 JEZZA: There's not exactly a lot of space to fire that. Whoever he's got using it must be tiny! 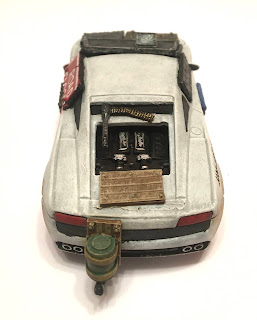 HAMSTER: Don't look at me, I've got my mini to drive!

JAMES: Notice both his weapons work backwards? I think the theory is that anyone driving around the Stig is going to be behind him...

THE STIG walks into frame.

HAMSTER: Right. Shall we get on then?

Once again, the above presumably makes it obvious that I'm still amusing myself with my Grand Top Gear Tour post-apocalypse nonsense for 7TV. This is another die-cast car that I've glued things to and then painted, which I'm still finding a lot of fun. I've been trying to add enough details onto these to make it look like they've been repeatedly modified over time - but I figured that beyond making sure he isn't killed, the Stig wouldn't want to add too much to his ride as more weight means less speed!

There's still more to come of that stuff, but of course we're nearing the time when I'll be able to resume actually playing games with other people, so I might unfortunately get distracted into something more sensible. We shall see.

I have also stuck to my own rule of continuing work on my Bolt Action Japanese as I go, so here's another 13 of those... 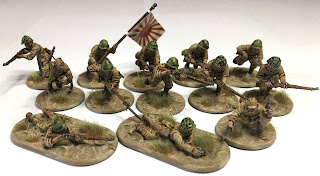 So, crucially, it's score time:
Painted: 44
Acquired: 31
Lead Pile Reduction: 13
Finally, the numbers have started to move in the right direction! Need to keep that up then...
Posted by Matt at 22:09