EXTERIOR. DAY. The ARMOURED LAMBORGHINI is speeding through the wasteland.

JAMES (V.O.): As you've seen, our modified vehicles give us an edge in surviving the day-to-day adventures of finding food and fuel in the brave new world. However, we're still a little short handed, and that can leave us a bit... vulnerable.

Several RAMSHACKLE RAIDER VEHICLES power toward the AMOURED LAMBORGHINI, firing their weapons at it.

JAMES (V.O.): So it seemed sensible for us to beef up our numbers a bit.

The STIG WAGON drives into frame, full of STIGLETS. They team up with STIG and the ARMOURED LAMBORGHINI to destroy the RAMSHACKLE RAIDER VEHICLES. STIG and his crew keep rolling through the wasteland.

CUT TO: The STIG faction, the AMOURED LAMBORGHINI, and the STIG WAGON. JEZZA walks into frame. 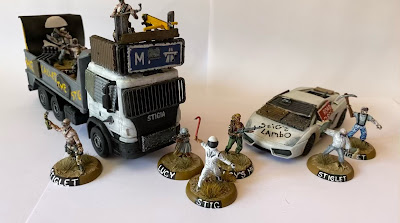 Alright, I've been away for months, et cetera. I got a bit carried away with finishing one of my planned 7TV Apocalypse casts, and that took a while, so this post ended up waiting until it was done. Anyway.

The idea is to turn my Grand Top Gear Tour cast from the 7TV Apocalypse day into four complete casts, one for each of the main characters. I decided to give each of them a unit and a co-star, and I have a long-term plan of creating some specific scenarios for them.

I already had the Stig himself (who I'm counting as a Terminal Crazy) and last time I finished his Lambo (which fairly obviously counts as a Racer).

I had the idea that Stig would amass followers that are in awe of his inhuman driving skills and general fearsomeness, so they'd try to be more like him. From there I came up with the Stiglets:

The idea here is that they've shaved their heads and painted themselves and their clothes to look like Stig in his racing gear. I think I've had varying degrees of success with the models, but at least I know what's going on. These all count as Joyriders in 7TV terms.

Branching out from these a little, I added in Stig Backley (a Petrolhead, so he throws a javelin...) and the Mechanic (who counts as a Mechanic). 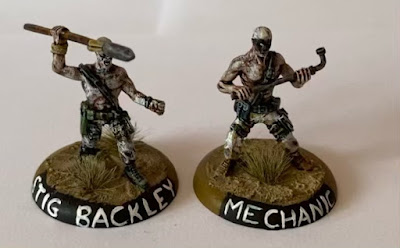 Stig's Lambo has a rear-facing machine gun, which has to be fired by a passenger. So, I wanted a gunner, and since there's not a lot of space in the back of the Lambo, it seemed sensible for it to be a child. Therefore, we get Lucy. 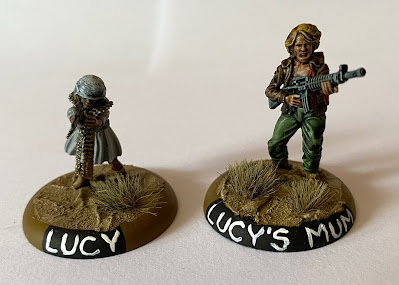 Lucy, counts as a Gunner, and since she's a child, she's accompanied by a "responsible" adult in the form of her mum, (a Bad Lieutenant).

Lucy's mum isn't as thoroughly bought in to the cult of Stig as her daughter, so hasn't gone for the black and white outfit - to show willing she has a Stig helmet patch on her sleeve. 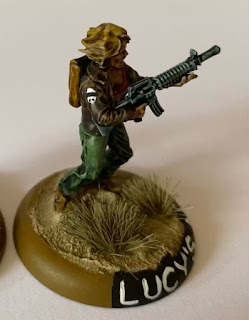 To go along with all of these, I wanted some transport, so it was time to get back to sticking stuff to toy cars again. Or in this case, a highway maintenance truck. 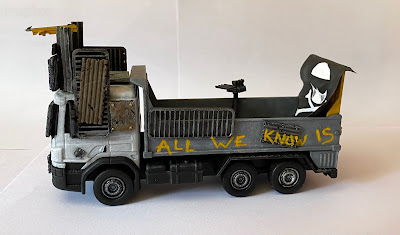 It's plastered with Crooked Dice armour plating and weapons, and I took some of the more obvious toy-looking bits off. 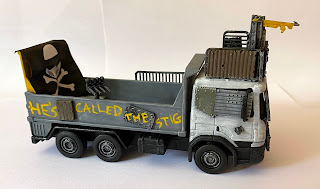 The big Stig flag on the back covers up another obvious toy section that I couldn't remove easily. 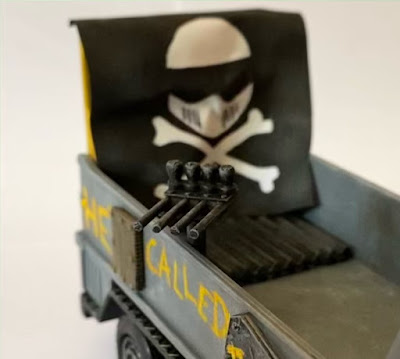 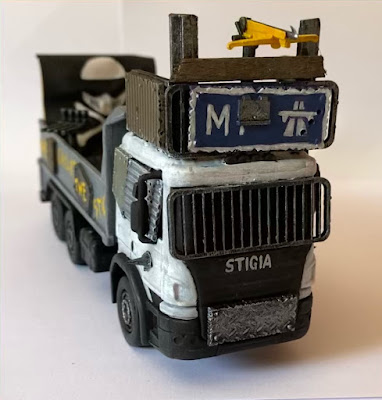 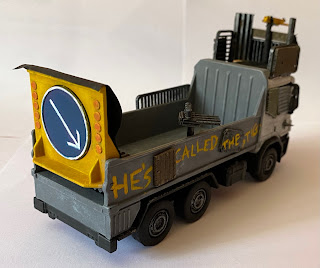 As it's a pretty hefty model I count this as a Big Rig, and I've tried to allow as many models as possible to actually fit on it. 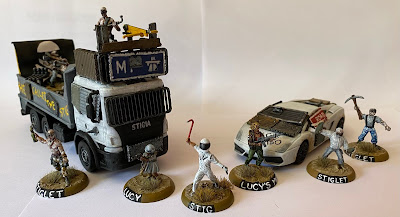 I now just need to repeat all this another three times to make the other casts! So that might take a little while...

Oh, also, I've carried on with Bolt Action painting alongside this too, so here are another 8 Japanese and 8 German infantry. 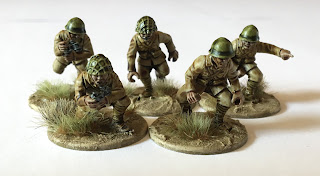 Having done all of that, it's time to update the numbers again...